AAA game developers are intent on punishing us with larger games and next-gen games are no different. Call of Duty Modern Warfare, with its battle royale ‘Warzone’, is perhaps the most egregious example in all of gaming. A Microsoft Store listing for the upcoming Call of Duty: Black Ops Cold War is set to continue that trend, with a minimum required storage size of 100 GB.

However, this escalation hasn’t caught on with next-gen consoles. The Xbox Series X will ship with a default 1TB hard drive, and the PS5  an 825gb hard drive.

If you thought 100 GB was bad – it’s only the standard base edition. After the game comes out, we can be reasonably sure that it will receive both updates and new content, leading to an even larger footprint.

Just look at Call of Duty: Modern Warfare. Its current install sizes – if you want all the content and Warzone, will run you nearly 200GB.

Even 1 TB isn’t going to cut it soon, and don’t even get me started on the 825gb that the PS5 is packing. You can see how worried gamers are getting in the video below. 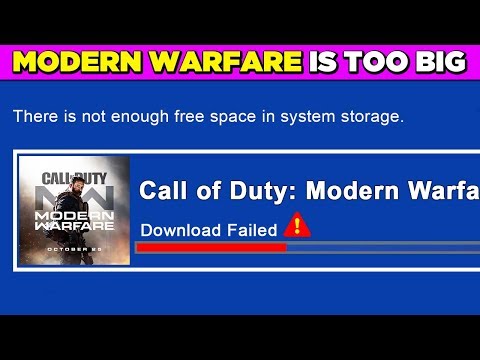 Upgrading Could Be Expensive

There has been a lot of chatter recently about how great the new SSDs will be in the Xbox Series X and PS5. The only problem with how fast and exceptional these new drives are is how expensive and confusing it might be for people to upgrade them.

We’re led to believe that the inclusion of a Solid State Drive (SSD), a staple in PC gaming for years, is one of the biggest reasons to embrace next-gen consoles. However, speed and functionality come at a price. It’s an expensive, even confusing, process for gamers to upgrade their console’s inadequate default SSDs.

Games like Call of Duty: Black Ops Cold War are going to necessitate an upgrade. For tech-illiterate people, understanding which hard drives are compatible and how to upgrade said drives is going to be confusing. People might end up buying the wrong drive or will need to pay more for proprietary drives and services.

Frankly, both the PS5 and Xbox Series X should come with 1.5 TBs or more, by default. It would certainly help if game studios hired developers with better compression wizardry.

Call of Duty: Black Ops Cold War is an entry-level, next-gen game. What happens in a few years when most games for the PS5 or Xbox Series X fill up a quarter of the console’s disk space, each?