James’ Los Angeles Lakers and the Kawhi Leonard’s Los Angeles Clippers initially tabulated a vote in favor of not finishing the season. During the meeting, LeBron was reportedly frustrated by Milwaukee’s unilateral decision not to take the floor for Wednesday night’s contest against the Orlando Magic. LBJ would’ve preferred that the plan be passed along to the Players Association to come up with a union-wide solution.

As an avid basketball fan, President Obama speaks regularly with players and league officials. When asked he was happy to provide advice on Wednesday night to a small group of NBA players seeking to leverage their immense platforms for good after their brave and inspiring strike in the wake of Jacob Blake’s shooting. They discussed establishing a social justice committee to ensure that the players’ and league’s actions this week led to sustained, meaningful engagement on criminal justice and police reform.

Not only did Obama save the NBA season via a phone call, but he also has a smooth southpaw stroke with the orange in hand.

Dressed to the nines, watch Barack put up a few shots in this YouTube video from 2010. It’s hard to shoot when in dress clothes, folks. Trust me. 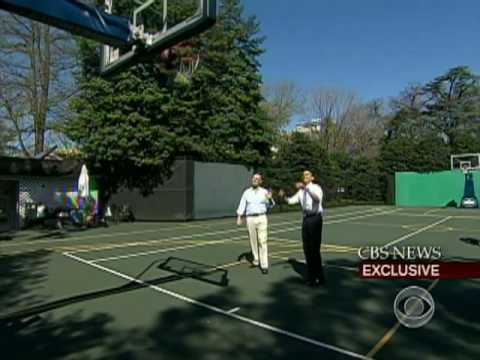 During his two terms as President of the United States, Obama was well known for his NCAA March Madness bracket. Trips to the Oval Office had Barack filling out his prediction bracket for all of the media cameras. He always did a fine job predicting college hoops’ results before the tip of the Men’s NCAA Basketball Tournament.

Impressionable Outside the White House

Recently addressing his distaste for the NBA and its players, President Donald Trump doesn’t care.

With Trump still occupying the White House, it’s easy to argue that Obama has been a more impressionable influence on Americans almost four-years removed from his time in Washington. That’s correct. Barack’s impact is more far-reaching than Trump’s. Even now.

Why else would NBA superstars pick Obama’s brain? He’s forged personal relationships with several of them and continues to be a father figure moving forward.

This is an easy one. The NBA might have been dead if the aforementioned contingent didn’t contact the former president. Thank goodness they did–the playoffs and the season inside the ‘Bubble’ in Orlando have been saved.

* All comments must be approved by staff before ap